KNOXVILLE, Tenn. — Tom Satkowiak had Oct. 17 marked in his calendar for months.

The date served as an unofficial start of the college basketball season — the SEC hosting its annual media day in Birmingham, Alabama.

Satkowiak, the Tennessee assistant athletics director for communications, had his bag packed and was almost ready to pick up Admiral Schofield and Grant Williams. They had a flight to catch with Vols coach Rick Barnes.

Then his phone rang. The caller ID read “Vanderbilt liver transplant program.” His heart pounded. This was the call.

“Are you kidding me? This is going to be the day?” Satkowiak thought.

That phone call turned Oct. 17 from a day Satkowiak had circled to a day he had hoped and prayed would come for years.

Satkowiak was diagnosed in 2000 with primary sclerosing cholangitis, a liver disease where a person’s immune system attacks the bile ducts, which results in scar tissue and slowly causes the liver to stop functioning due to damaged cells.

There is no cure. The only fix is a transplant. On that day, Vanderbilt called to let him know they had a liver available. He had spent more than four years on the transplant waiting list.

Satkowiak’s day and life flipped. The 38-year-old tasked his support staff with handling SEC media days and headed for home. He had a different bag to pack and a trip to make to Nashville with his wife, Brooke.

A few hours later, he sent an email from the hospital to his pastor and close friend Tim Miller with the subject line “just in case …”

“If for some reason God is eager to have my company — which is fine — can I ask you to be sure the church provides a network of support for Brooke?” Satkowiak wrote. “Just love, attention, a refuge. She has been my rock. Thank you. I love you.”

Why Tom Satkowiak couldn’t kill himself

He got out of bed one night during a particularly difficult stretch and thought “relief is right there in the garage.” He could start the car, roll the windows down and be gone. But he knew that wouldn’t be the answer. Insurance wouldn’t pay out to take care of Brooke if he did that.

He needed a different way.

He drove west down I-40 on his daily commute home. He exited at Pellissippi toward Oak Ridge and saw an out every day: a pillar under the Dutchtown Road overpass. 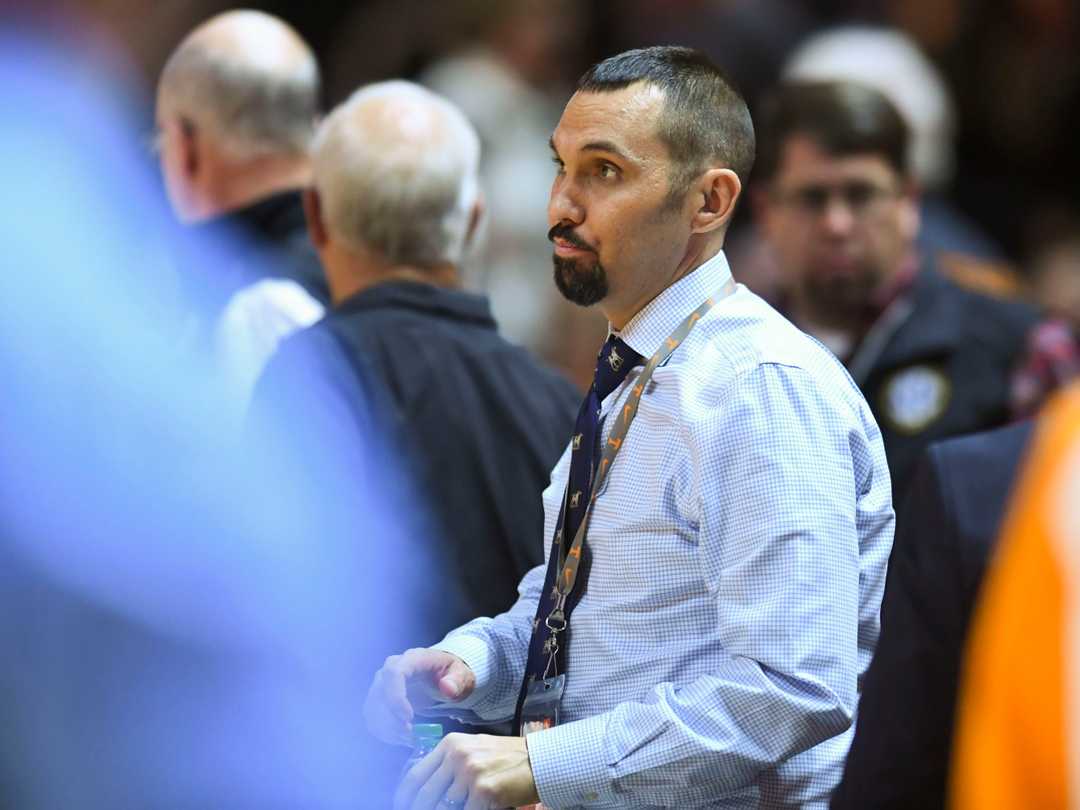 He thought of undoing his seatbelt, crashing into it and ending his suffering a few miles from home in Hardin Valley.

“There was a night where I went downstairs I couldn’t sleep,” Satkowiak said. “I don’t know what my problem was that night. It was so bad that I wanted to cry, but I didn’t want to wake Brooke up. Somehow, I ended up in a bedroom literally on my hands and knees just pleading with God. We were having a really serious talk.”

The darkest thoughts grew as his symptoms rapidly worsened after Tennessee’s season ended last March in Dallas. Brooke believed her husband was “on the verge of a total collapse.”

He long battled osteoporosis as a side effect of PSC, having dealt with microfractures and broken bones. He had suffered from erectile dysfunction for about 18 months. His weight plummeted.

Then he lost control of his bowels. He walked into his house, the basketball season in the past and his body gave out. He defecated in his pants, a single moment starting months of paranoia.

He put a trash can in his office closet to serve as a makeshift toilet for when he couldn’t reach the bathroom down the hall in time.

He wore Depends backward to work, afraid someone walking behind him would see the adult diaper bulging. Brooke bought more when he ran out, but never at a store near their home. Car trips meant trash bags and toilet paper in the backseat.

“Between that and not being able to be romantic with your wife, those two things — there’s nothing that makes you feel like less of a man,” Satkowiak said.

His condition declined to the point that his longtime liver specialist, Dr. David Raiford, felt a re-evaluation of his health status, which affects one’s transplant standing, was warranted. His disease severity score rose as a result and he moved up the waiting list.

During the difficult times, Brooke told friends and loved ones that Satkowiak had “forgotten what it feels like to feel normal.” Working provided his lone sense of normalcy. He thought that taking time off work was equivalent to “taking the first step toward the grave.”

No one at work knew everything he was dealing with.

He shared his worst times with Miller, the pastor at Sevier Heights Baptist Church. Those nights where he felt lonely and low and like a burden to Brooke.

But he kept going.

“He fought it and he handled it as well as anybody I’ve ever seen,” Barnes said. “He just was amazing. When I look back on it, I don’t think we could realize how sick he really was.”

Barnes learned two things about Satkowiak from former UT athletics director Dave Hart when Barnes was hired in 2015: He was a fantastic sports information director and he had a liver condition.

Their first conversation revealed both.

“I looked at him and I said, ‘Do you ever think about dying?’” Barnes said.

Satkowiak said he did.

Those questions and the ensuing conversations began a change in Satkowiak. He had grown up in church but stopped going in 2000. He spent the next 15 or so years avoiding the topic altogether, including when Brooke suggested going to church.

“It’s something only he could have done,” Satkowiak said.

One day, he asked Barnes a question he couldn’t answer. The Satkowiaks had a sick dog and he wanted to know if pets go to heaven. Barnes called Miller to pass the question along.

“That was — next to getting ‘the call’ — one of the best days,” Brooke said. “Seeing his journey since then and how he has handled all of this with absolute grace and faith and strength has been amazing to see.”

Satkowiak had spent years feeling sorry for himself. He called it spinning his wheels with a bad attitude. He had bitterness toward others who received transplants despite having a condition brought on by their own actions. 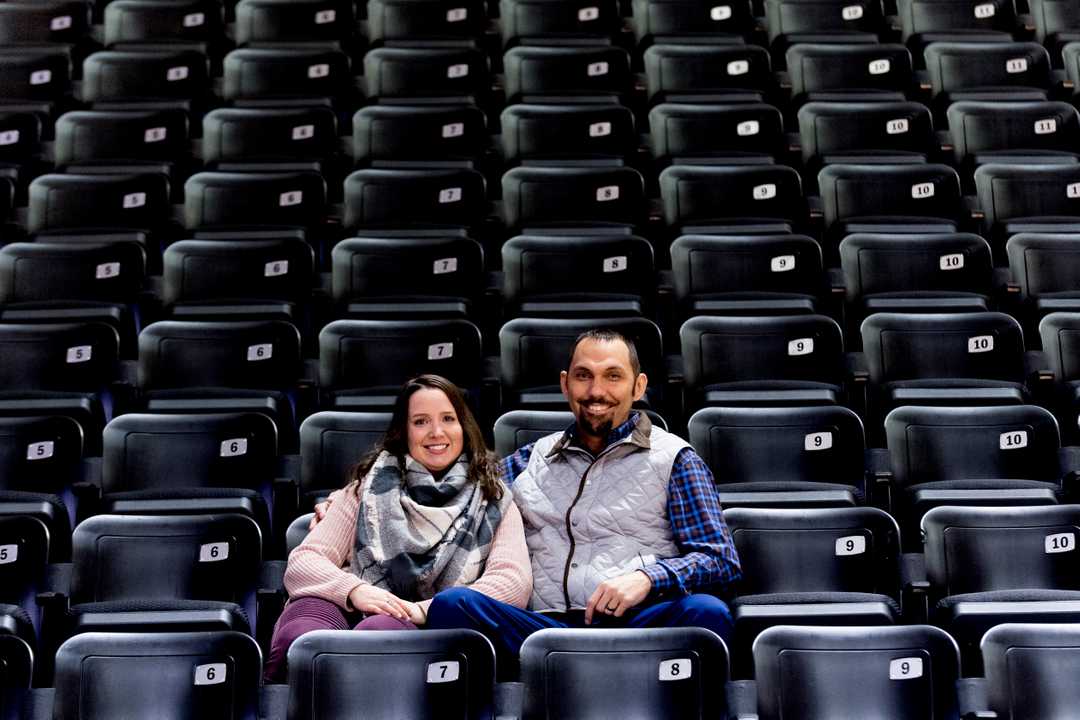 He knows he endured something awful, but now wonders about others who have it far worse than he can imagine. He’s ashamed that he ever considered driving into an overpass and killing himself.

He’s thankful he never acted on those thoughts and wants to share his story to provide others with hope.

“The Tom I have known is just this beautiful man going through pain that is still consistently in tune with being thoughtful with other people,” said Miller, who spent “dark nights” praying with Satkowiak.

Said Satkowiak: “During those really hard times, I could always fall back on God never giving me more than I could handle. His power is made perfect in my weakness. I truly believe that changed my whole outlook.”

A few weeks after Satkowiak accepted Christ, he was baptized. Tennessee had an early Sunday afternoon game, but he headed for church in the morning.

Satkowiak sat in the front row, waiting his turn when someone slapped him on the leg. He looked over and saw Barnes with a huge smile on his face.

“I wouldn’t miss it,” Barnes said. “I take my job very seriously. But I take other things equally seriously. That is very, very serious. The fact he made that commitment, really and truly is as important as anything I could have done that day.”

Satkowiak called Brooke and then Barnes after learning the good news on Oct. 17. He says the latter was more emotional because of how Barnes impacted his life.

“I said, ‘Hey man, this is what we have been waiting for,’” Barnes said. “I remember saying to him, ‘God is good all the time.’”

Satkowiak headed to Nashville almost two decades after he was diagnosed in Michigan.

Six years after his diagnosis, he began seeing Dr. Raiford. Eight years after that, he landed on the transplant list with no idea if a liver would come a day later or a year later.

Finally, he and Brooke felt freedom driving down I-40, past the pillar where his darkest thoughts took him and without doubt of what was ahead.

“I think both of us had just this sense of peace about it all,” said Brooke, a nurse anesthetist at Parkwest Medical Center. “I don’t think we really ever worried about it when we got there.”

The days after the surgery were filled with post-transplant education, meeting with physical therapists and starting anti-rejection medicine.

They spent the following weeks living in a Nashville apartment near the hospital as his recovery began. Satkowiak mentioned to Brooke one night in the apartment that it was the third anniversary of his decision to accept Christ. She asked him if he thought they’d be sitting there if not for that decision. “Absolutely not,” he said.

“I truly believe that I would still be sitting here waiting on this transplant had I not first come to trust Jesus,” Satkowiak said.

Within a couple days, Satkowiak was walking laps around the ICU. But he’s quick to say he’s not tough and no hero. He says going through the transplant wasn’t impressive. He points out that someone lost their life and a family chose to give him that organ so he could be healthy for the first time in years.

His physical appearance improved in the days and weeks after the transplant.

Swelling in his abdomen subsided. His eyes, which had long been jaundiced, and his complexion — long tinted — returned to normal.

“Every day, there are moments like, ‘My eyes are white. I had a liver transplant. I can’t believe this,’” Satkowiak said.

Satkowiak returned to Knoxville on Nov. 12. He immediately jumped back into Tennessee basketball. 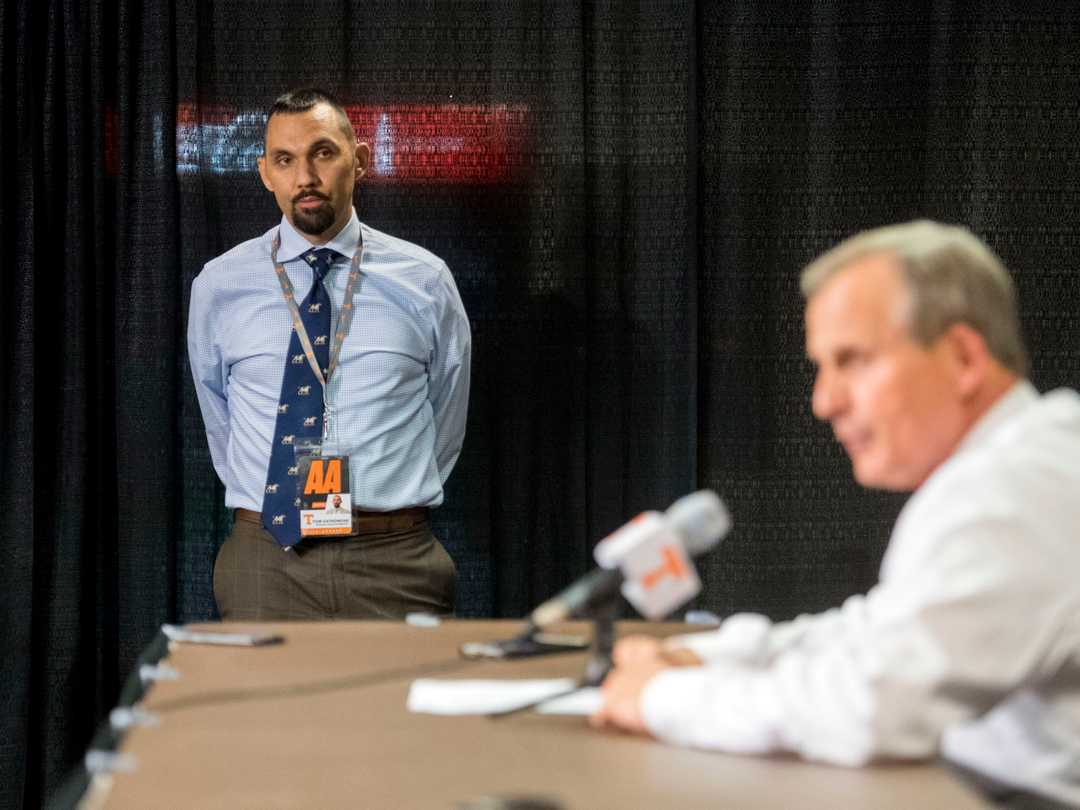 He called Barnes that night and asked about coming to UT’s game against Georgia Tech the following night. He wanted to see the players. He didn’t want to be a distraction.

“I said, ‘Are you crazy? You walking into that building is better than winning a game tonight. You better come,’” Barnes said.

When they saw him, they stopped stretching and ran to greet him.

“It was just so amazing to see all those guys light up,” Brooke said. “I wanted to start crying. It was happy tears. To see how much they care and love Tom, it really gets you.”

Satkowiak took his usual spot on the sideline for the first time this season that night. He told Brooke he would take a back seat in that game. He didn’t. He couldn’t.

The whole day was something he will never forget, he said, especially the pre-game national anthem.

“I had tears in my eyes just thinking to myself, ‘I am back with my team. I have a healthy liver inside me,’” Satkowiak said. “That was one of those moments where you realize all your blessings.”

One of the simplest blessings is this: When the phone rings these days, there’s no rush to look and see who is calling.

“We talk about being healthy,” Satkowiak said. “What is especially healthy is being able to know I can put that phone in the other room, relax and be at peace.”

To register as an organ and/or tissue donor, visit www.BeTheGiftToday.com

The texts, information and opinions published in the space are the sole responsibility of the author. Therefore, they do not necessarily correspond to the VIP CEO’s point of view.

The world&rsquo;s tallest buildings aren&rsquo;t being built in the USA anymore